Hey, so this is my first post, and what better than to make it about my recent experience at XTerra National Championships half marathon! It just so happened that it was held at Snow Basin Resort just a short 15 minute drive from Ogden, Utah where I spent 4 years doing school and whatever else there was to do.  Me and the team (Weber State Cross Country Team) would go to Snow Basin a lot to do trail runs, so I thought I would know the course well enough. It turns out that the course followed a trail that I had never run before, and I found out why: it included about 2000 feet of climb!

I’ve never been to an XTerra event and I found I’ve been missing out. They do a great job of making it exciting and involving and the whole atmosphere is awesome! I grabbed my bib and started warming up. I was expecting to run into some runners I knew since I was well acquainted with a lot of runners around the Ogden area, but I wasn’t recognizing anyone. I was thinking I’d to run into former team mate Brett Hales, who won the event last year, but he didn’t show up, I think it was because he had another race the day before. I don’t know if that was  a good thing or bad thing.  I did run into Bret Ferrier, who was also a Weber runner Alumni, although he was a bit before my time.  We talked a bit before the race started, and then before I knew it they fired a cannon (very loud) and we were off through a cloud of smoke.

I didn’t know what to expect from this race, but after a mile I could tell there were competitive athletes involved.  The pace wasn’t easy, and I was sitting in about 6th place for the first few miles.  I wanted to fight for that 5th place spot since that’s where the money was along with an entry into World Championships in Hawaii! There was a group of three of us fighting for that 5th spot for a few miles.  Me and Nathan Peters and David Dickshinski, both from Salt Lake.  We would switch the lead every so often until about mile 5 when the heavy uphill started.  That’s when Nathan took off uphill; it was as if he didn’t even notice that the grade of the trail changed to super steep!  Regardless, I never saw him again.  It was agonizing uphill for miles after that and I only caught glimpses of David (who was putting a big gap between us) when I had a long view ahead of me, other than that, I was stuck in 7th place.

It stayed that way until about mile 10 when it was finally going downhill again.  That’s when Bret Ferrier caught me. I didn’t know he was so close, but he passed me on a corner and I determined to stick on him.  It was good because he woke me up out of a lull of running comfortably and I glued myself to his heels, which might have annoyed him, haha.  We cruised down the switch backs descending Sardine Peak.  We passed a spot that was familiar to me (me and bud Mike Hardy had fished there a month or so earlier) and I knew there was only about a mile left until the finish line.  I had somehow caught some wind and thought I’d push the last mile.  I passed Bret, feeling a little bad that I had drafted off of him for that long, and tried to keep a faster pace.  It was going well until about 1000 meters out and my quads were burning up.

Finally I caught a glimpse of the finish line and I was hoping to coast in.  But Bret wasn’t going to let me have it so easily! I heard the crowd yelling louder and soon Bret was ripping past me.  I knew Bret was fast, but he is a long distance trail runner and I just graduated college where I’ve been working on speed on the track for months.  I tried to summon that legspeed and turn the gears; I had just enough to kick back into the lead and solidify my 7th place finish.  My time was 1:24:21, probably just a quarter of a second ahead of Bret. I was pretty pleased with it, but I was still a good 10 minutes behind Patrick Smyth who won the race. No shame in that though! I talked a bit with Nathan Peters, who had killed the uphill.  He said he knew the course and it sounded like he knew he was going to excel there.

Overall it was an awesome race and the recap video is pretty intense, it’s worth a watch! I’m very impressed with XTerra: https://vimeo.com/channels/xterra/139877810 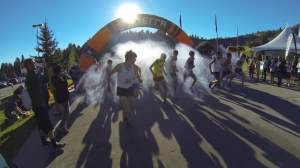 Summits of My Life Blog